Are our students ready for the future? 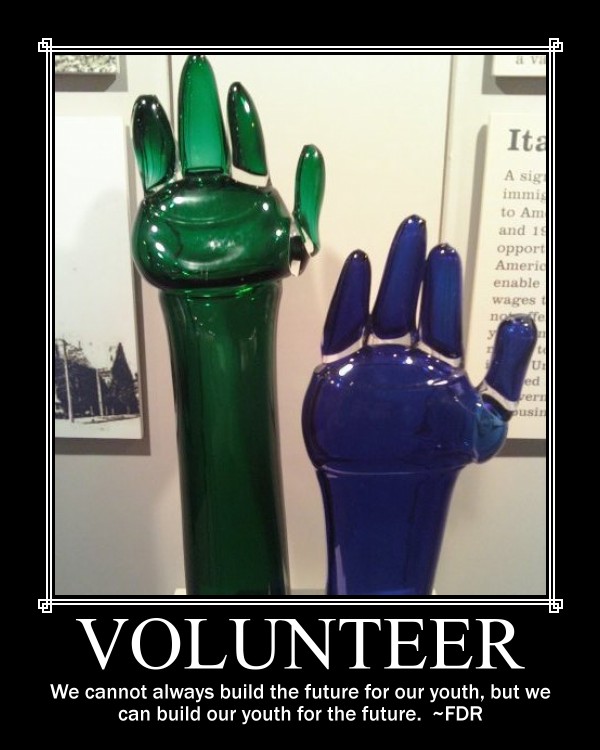 I have seen many great inspirational posters – I was motivated to create my own. I found the “inspirational poster creator” through a Google search. The choices at Big Huge Labs were all easy to use.  I found the quote at Quote Garden. My sister and I took the picture while visiting a museum in Philadelphia.

I choose the quote right after reading the news. Once again reading the news made me realize that students (and many adults) need to be more grateful, more globally aware, and more generous.  We cannot control many of the earth shattering or life altering events – like natural disasters or market crashes. The last year or two has dramatically changed how many Americans live their life. Even the rich are having to watch their spending because money is not as readily available as it once felt. Life was changed in a matter of minutes for thousands of people in Haiti on Tuesday. If it changed, that means we still have life, something in itself to be grateful for.

I want to stop focusing on what I do not have, and be grateful for what I do have. It does not matter how old the computers might be in my classroom, I do have computers. This year I might not have gotten a mini-laptop grant, but we did get an Interactive Whiteboard installed in the room.

Students should be ready for so much more in life than comes out of a textbook. People have been saying this for years, but many people are only talking about the 21st century with computer skills. I think the humanity and compassion need to be reinstated. The Internet initially took away the identity of people – you were not laughing at an actual person, just a video posted on the Internet. However, with so many web 2.0 changes, we can now communicate with people around the world, which makes them actual humans again. I would hope that people are still able to be compassionate towards their neighbors in times of need. Technology has changed the definition of neighbor – but the willingness to help a neighbor should be the same. Haiti is our neighbor.

I was angered by comments to the news stories explaining the situation in Haiti, specifically the capital. How can people say they deserve it? Or that the United States has too many of their own problems to help? Even people living in true poverty in the United States have a better life than the majority of people in a 3rd world country. This ignorance needs to be erased. People need to be more globally aware of what the world is really liked. The United States is not the center of the world – even if it appears that way on maps produced for the US.

I also think that people need to be more generous, it could be with time or with money. If people were willing to volunteer instead of always being worried about how much they are being paid, they would get more enjoyment out of the situation. For years in high school and college, I struggled to get out of bed early on Saturday mornings … but I loved working for Good Works and Habitat for Humanity. I enjoyed spending the entire day with friends helping others. The feeling of accomplishment at the end of the day really can not be described.

There is hope for the current and future generations. With the massive amount of money needed to help Haiti, the Red Cross set up a donation system that was able to raise $1.2 million in 24 hours. All people had to do is text the word ‘Haiti’ to 90999 and $10 would be automatically donated to the Red Cross. The charge would show up on the cell phone bill. It was a true overnight success, which is evident by the new wave of text scams trying to capitalize on people’s generosity.

Our Spanish club students also understand their global responsibility to help when possible. One of the goals that they established on their own was to raise money to help save the rain forest in Central America, specifically in Costa Rica. At the end of the year we are going to donate the money through Kids Saving the Rain Forest. I think the students goal is to have enough money to adopt and name a monkey … I envision a poor monkey named Cheese or Llama, or a combination of the two. While the name might end up being crazy, the intentions are good.

I need to model these in my own life: gratitude, global awareness, and generosity.

Middle school geography teacher, tech trainer, Flocabulary MC, Nearpod PioNear, and Edcamp Hershey Founder. I have embraced the power of purposeful technology and am creative with their application. If I am not doing something with ed or tech, I am probably reading children's books, baking with a toddler sidekick, running around, or dreaming of traveling.
View all posts by Lisa Butler →
This entry was posted in Changes for Future, Inspiration and tagged cellphone, footprint, global. Bookmark the permalink.